The Siegel Family has a long four generation 100 year history on their farm on Weber Road. Frank and Gertrude Siegel moved to this farm in 1909 to raise their growing family. Ththe Siegel’s familyey raised their seven children, five boys and two girls on this farm. When Frank got sick, their son Francis second generation, moved back to this land to continue farming and to raise his family in the mid nineteen forty’s. After Frank’s death, Francis and Marie Siegel raised their family in the same house and farmstead that Francis grew up in. Farmer Paul, the third generation and sixth oldest of nine, grew up with his brothers and sisters, five boys and four girls, in the same house that his father Francis did.

Fall has always been Farmer Paul’s favorite time of the year. He was born on his father’s 50th birthday, October 30, 1957. On September 6, 1980 he married the love of his life Susan Huston. A short eleven months later their first son Jason was born in 1981 followed by Zachary 1983, Kyle 1986, and Kaitlin in 1987, making the fourth generation. Jason has 4 children, Madison, Mia, Miley, & Lexi. Kyle married Kelsi in Sept of 2012 and they have a daughter Kendyl along with the FIRST baby boy in the 5th generation Kaden. Kaitlin and Dave were married by her Uncle Joe (Bishop) at the Cathedral of St Raymond, January of 2016 followed by a beautiful Traditional Timber Barn reception and have 1 son Jaxson. You will see Jaxson on the farm riding around on his toy tractor.

There have been many changes on the Siegel Farm since Grandpa Frank started farming this land with a team of horses in 1909. As the third generation, Farmer Paul continued growing Corn, Soybeans, Hay, Pumpkins, Indian Corn, & Gourds. In the 1970’s he started growing sweet corn and pumpkins, and stopped raising livestock in 1980. As the kids got older, they provided valuable labor such as hand picking sweet corn at 5:30 a.m. Then Paul and Sue, with their young but growing family, added Agri-tainment to their farm with pumpkins and cornstalks. Our guests wanted hayrides and haunted barns and much more. After Jason graduated from Lewis University and Kyle from high school, they followed other interests and jobs off the farm but always come back to the farm in the fall to help on weekends. Zach and Kaity have stayed with farming and are working their sweet corn stands seven days a week during the summer and are ready someday to take over as the fourth generation of the Siegel’s to operate the farm. They both have inherited love of the land, growing and working with the public from their father Paul and grandfather Francis. Paul, Sue and family are here to put smiles on everyone’s faces and pleasant farm memories. So come to our Farm and Harvest some Memories with us. 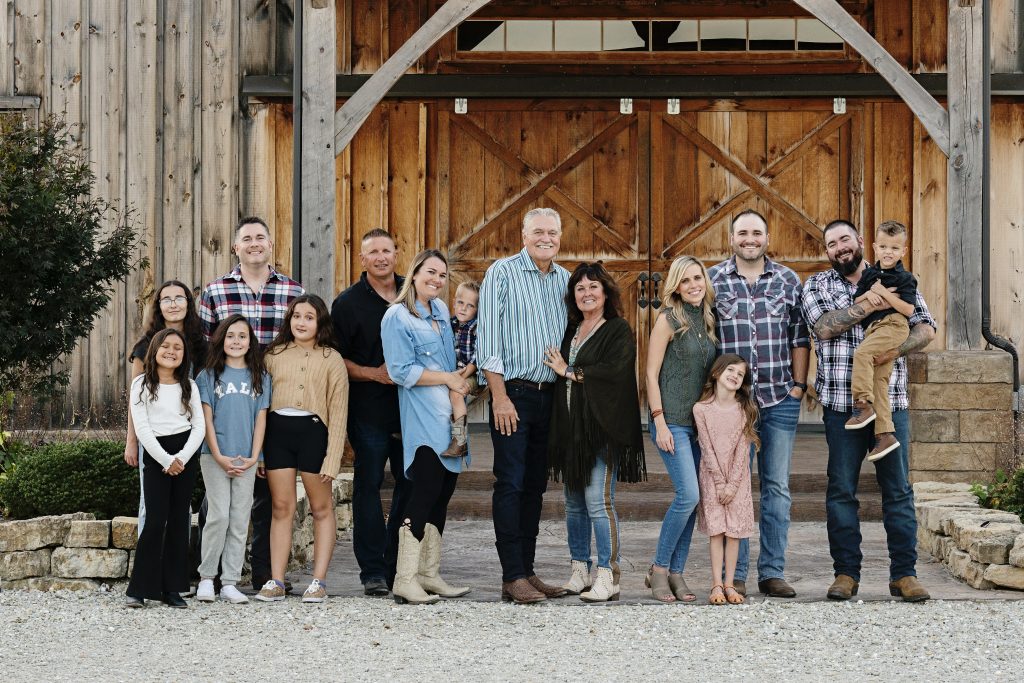 On September 5th at the age of 19 George Siegel Arrived in the United States on the ship Germania.

Home was picked up and moved 100 feet and destroyed. Gertrude was severely burned by coals from overturned stove. Frank was crushed and broke several ribs while saving his sons. Ambrose suffered internal injuries and was immediately operated on. Family returned to original home. Gertrude died the following year.

Veronica died in child birth leaving Francis a widower with 2 children under 2. Shortly after Francis moved to his father’s farm with an Auntie to take care of the children Jeanne born 1938 and Larry 1939

Frank G. Siegel died. Francis was named executer of the will and the 280 acres were distributed among the children. Francis received 40 acres of the original farmstead that was purchased in 1909

By this time the profitability of farming changed quite a bit. Francis decided that he could better utilize his workforce of 9 children. He kept milking cows, pigs and grew a few crops while he tested the 2200 Laying hens he purchased. In a few short years Francis built a State of the Art Chicken House.

They had expanded to 6800 laying hens Marie was known as the “Egg Lady”. They hired neighbors to help process 5000 eggs a day.

Paul and Art farmed the family’s land as well as surrounding farms. They even sod busted Stateville property. Paul and Art supplemented the summer sweet corn crop with a trucking and Grain Storage business.

Aerial Image of our farm

A devastating fire destroyed the chicken house and Killed all the chickens. Huge Loss

Following in his Father’s and Grandfather’s foot steps, Paul Siegel nurtures his love for the land, his growing Family and diverse business acumen.

Sue Siegel cultivates her talents at the Garden Center, sharing her passion for plants and gardening with her customers. Sue calls it “her addiction.” The Garden Center has expanded and carries many varieties of plants and products That are hard to find, backed by a knowledgeable staff.

Kaity and Zach at their satellite produce stands have become welcomed fixtures In the surrounding areas.

Pumpkin Fest: fall is a very exciting time at the farm. Every Fall tens of thousands of people come to the farm and take the hayrack ride out to the Pumpkin Field and pick their pumpkin. They also enjoy all the attractions and the food. School children enjoy their educational field trip which area schools have been signing up for over 20 years now. Make Pumpkin Fest your Family tradition.

Siegel’s Cottonwood Events: this is the newest addition to the Siegel Family brand. So many people have asked to host parties or bring their groups to the farm that the Siegel’s decided to open up their farm in a new way. The farm is now open to any group which can choose from an amazing array of activities to challenge their group or simply entertain them. The Rock Climbing Wall is a new addition this year and is already garnering a great deal of attention.

We look forward to the future. Our next generation is ready to grow with yours. Siegel’s Cottonwood Farm, a Family Tradition

Off Season
(Nov-April)
By Appointment 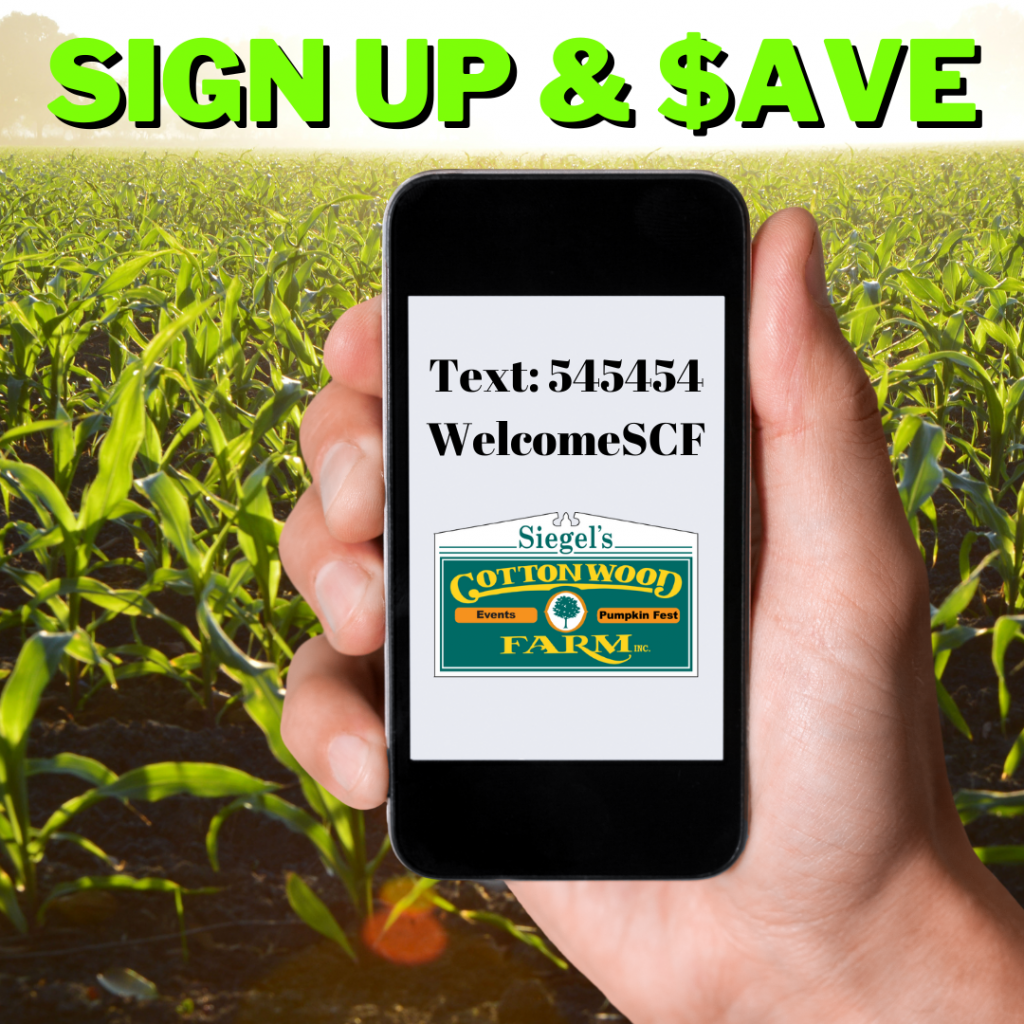